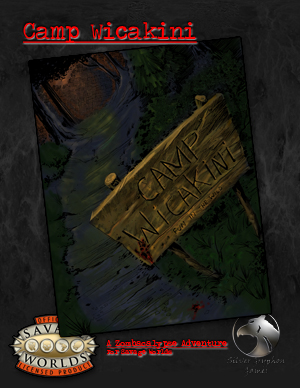 Nestled among the dark forests of lake country stands a summer camp. It is a place named after an old Indian word; Camp Wicakini. On the shores of Lake Wicakini, the Lake of Ressurection, the camp has stood for decades. However, now something evil walks the woods; something terrible, something...hungry....

In this adventure, the players are shown the surroundings of Camp Wicakini, and they play the parts of the camp counselors. Eight pre-generated characters are available for use, as well as crucial parts of the Zombacalypse book. The adventure is designed to be run using only the Savage Worlds Core Book.

In addition to the eight pre-generated characters, this adventure comes with maps appropriate for the adventure, inventory lists of what's in the camp, and enough information to run the game and yet, in Silver Gryphon style, allow you to make the game your own. The interior, as well as the cover, is richly illustrated by Storn Cook, with the cover colors done by Ben Overmyer. Kevin Rohan supplied additional artwork for the interior.

This tight little adventure with a killer twist makes the perfect game for new players to the Savage Worlds system or for long time veterans. Get into an adventure today!

Save this product for later
Display prices in: USD